TLDR; we are going to move to a 6 month release cadence, with a Long Term Support (one year of support) release in May and a Short Term Support (6 months of support) in November. We will increment the major version number for each LTS release.

As part of the 1.0 release planning the SunPy developers and the board spent a long time discussing how we want to version SunPy and what we want to use our versioning a release schedule to achieve. We went through two major iterations of this plan, the first can be found in the abandoned PR to the SunPy Enhancement Proposal repository #30, and the second one which was accepted in #40.

In moving SunPy out of the 0.y series of releases we knew that our users would be expecting us to make breaking changes less, and for them to be able to rely on SunPy for longer.

We wanted to balance the desire for people to be able to start using SunPy for a project and be able to see that project through without having to constantly adjust to many changes in new releases. On the other hand, we wanted to also allow the development of SunPy to continue without having to delay people contributing improvements to SunPy because of a strict versioning scheme.

We also have to consider that, currently, SunPy core is developed entirely by volunteers, and supporting old versions of the library is a time consuming and sometimes thankless job.

The solution we landed on is to provide a Long Term Support release that we will support for one year (i.e. until the following LTS release). This gives people who want stability a release schedule where they get bug fixes for a year. While also allowing SunPy to do releases on a six month cycle to get new features out for people to use.

To make it clear which releases are Long Term Support releases, we will increment the major version (the first number) for each LTS release. This means SunPy 1.0 is a LTS release which we will be supporting until the release of 2.0 in May 2020.

The all the non-LTS releases between the LTS releases will increment the minor version number, as there is only one release planned between LTS releases the normal release number will be 1.0, 1.1, 2.0, 2.1 etc. 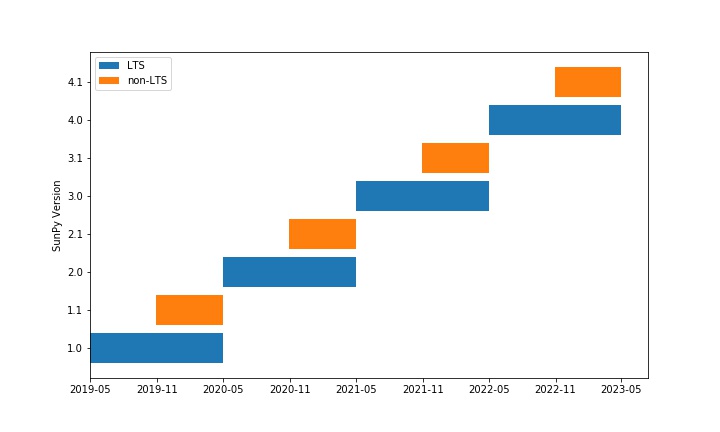 We still expect, and have plans for, changes to many parts of SunPy. We believe these changes will enable even more people to find SunPy useful in their work.

To enable people to prepare for changes and to not be in for big surprises when updating SunPy we will endeavour to emit a deprecation warning for any breaking changes for one LTS release.

The upshot of this is that, if now after 1.0, we want to change something in a backwards incompatible way we would continue to provide both the old and new ways until after the 2.0 release. The 2.0 release would emit a deprecation warning, to give people who go from LTS to LTS a year to update their code before the next LTS.

I hope this blog post gives you some insight into how we made this decision and why, if you have any comments please don’t hesitate to get in touch using any of the usual ways.